How a giant tortoise gets off its back 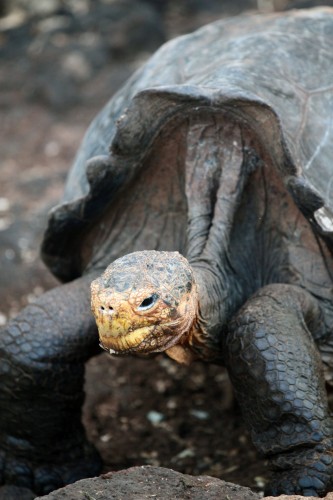 The shells of tumble-prone giant tortoises on the Galapagos Islands may not do them any favors, according to a new study.

The Galapagos Islands are home to multiple species of giant tortoises. Two distinct shell forms can be observed among the different species: “domed” and “saddleback”. Domed tortoises have very rounded shells, and live in the cooler upland areas of Galapagos. Saddlebacks have remarkable shells with a flared anterior opening, which actually resembles a horse saddle; it is assumed that their high shell opening allows them to extend their necks upward to reach taller cacti, which are an important food source in the warm, dry, coastal environments where saddlebacks live.

Yet, it is possible that the saddleback shell shape also has other functions. These tortoises can fall on their back while walking on the rugged volcanic landscape of the Galapagos. If they cannot turn over quickly, their chances of dying increase. It is possible that the peculiar shape of the saddleback shell could help these tortoises roll back onto their feet.

To test this hypothesis, the researchers of the study, including Dr. Gisella Caccone (Department of Ecology and Evolutionary Biology at Yale) developed computer models of falling tortoises. To make a computer model, they reconstructed the tortoises’ shells and found their center of mass. They captured the shape of the shells by photographing 89 tortoises of 5 species from all angles, and then recreating these in 3D. Then, by placing the tortoises on a measuring platform, they found the position of the center of mass inside a living tortoise. The reconstructed digital tortoises were then rolled in the computer.

Contrary to what was expected, saddleback tortoises need more energy than domed ones to roll back onto their feet. Perhaps the longer necks of saddlebacks are used to help them roll over, while domed tortoises are aided by their rounded shell shape.

Additional details can also be found in The New York Times article: How a Giant Tortoise Gets Off Its Back.

Edward P. Bass Distinguished Lecture "Bicycling, Birding and #BLM Across America in a Summer of Chaos"

November 11, 2020
The Yale Institute for Biospheric Studies is delighted to welcome 14 recently appointed postdoctoral associates to our community. For more information, please view the... 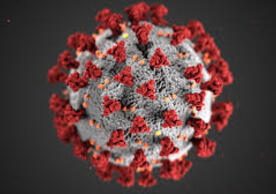 November 9, 2020
“A group of scientists at Yale University are using wastewater from sewage plants and sewers to predict where new coronavirus outbreaks might pop-up, giving communities a...
END_OF_DOCUMENT_TOKEN_TO_BE_REPLACED